Just to keep you tuned about my eurorack modular system, this is my actual configuration: 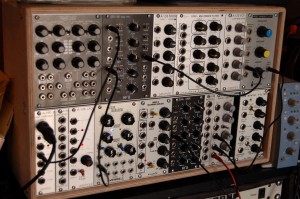 Yesterday I tested the MFB VCO and the MFB Dual ADSR with my Roland System100 mod 102, during the test I did some demo recordings.
The demos are quite long and in every demo I used the same “sequence” and tweaked the knobs to let you hear the behaviour of the system.
As the melody is quite redundant  I hope you don’t get annoyed and focalize your attenction on the sounds.

PAY ATTENCTION!!
When you listen to the sound keep the volume at a fixed level, don’t turn up the volume when some sounds seem more quiet because there are some resonance peaks that can DAMAGE your speakers and your EARS!

As I described some days ago , I’m building a little modular in eurorack format to have a little versatile synth to make modular sounds easy, and to expand my system of vintage semimodular synths:

The Korgs work well altogether as they use the same korg “standars” as 1/4″ plugs, hz/volt , etc.
The system is well balanced and is very versatile , there are no tuning problems and connections between one module and the other has no need of attenuators and result open to every use.

The Roland System 100 is quite different, it uses 3,5mm plugs, 1volt/oct and is quite difficult to make it interact with the Korgs even because the sound of the Roland is “stronger”.
After analizing different solutions (the first was to buy the other parts : mod 101 the keyboard, the sequencer and the mixer, while the second was to buy a System100m…) I decided to buy an eurorack to have a synth easier to control with computers and midi devices , more stability and however the freedom to build a synth choosing every part.
The result is, as I described, a synth with basic elements that are quite different from the “new analog” I own (DSI Evolver desktop and Studio Electronics ATC1 and SE1), but quite versaatile for a wide range of sound including FM modulations.

The first thing I tried is the interfacing between the Eurorack and the Roland and I was surprised they interact very well .
The Midi-CV interface works very well with the System100 too (I use a Kenton Pro 2000 for it, usually..).

The first thing I tried was to compare the Roland VCO with the MFB VCOs and I was quite surprised.
The Roland is really thick on the lower frequencies, and the square waves are awesome , but the MFB is really good too and they have a similar sound in many ways.
The MFB is less deep , especially when you hear in A->B comparison , and a little darker on the highest frequencies, but does a really a well job fattening the System100 sound without sounding different.

What makes the BIG difference is the Roland Filter.
Using only the MFB VCO in the roland path , with the roland VCO with zero volume, the result is amazing.
The VCO sound smooth and rich, really fat on the lower range and really harmonic and “creamy” in the higher register.
The big difference is evident in the lead sounds, they sound smooth with big carachter and warm sound without being harsh or disturbing but always rich of mid and high harmonics.
As the resonance grows the sound became quite acid (the typical roland filter carachter) but with growing harmonics, and a massive warm sound.

Then I tried to use the MFB dual ADSR to compare the behaviour of the two type of env and even here the different is evident.The Roland one is FAST and SNAPPY but always “rounded”, more musical, and gives the synth the classic Roland touch.
The MFB ENV is really fast, maybe faster than the Roland, but also more angular, with the attacks at zero makes a “ping” sound at the trig of the note.
Maybe the voltage that this env produce is higher and should be attenuated to get more musical results, even if  the different behaviour is really interesting to get different result.
The first thing done was a sequenced upright bass that sounded really awesome.

I did the same sound using only the eurorack and the sound was similar but more enarmonic, the reason is without any doubt the different between the two filters.